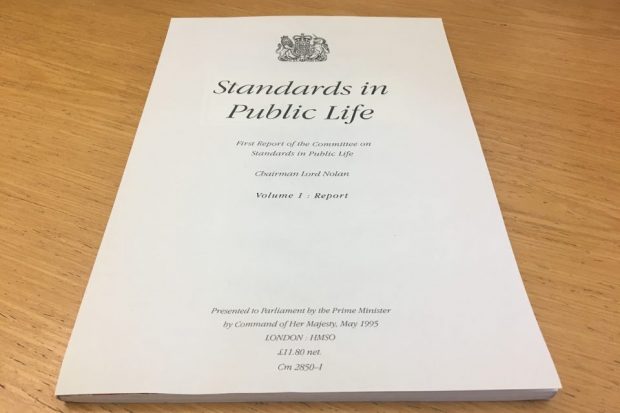 Later this year, this committee – and the Nolan principles of public life for which it is responsible – will be 25 years old. A great deal has changed in the regulation of standards and conduct during that period.

Milestones like this are a natural point to look back at what has been achieved and to think about what the future holds. I doubt any member of the public – or indeed any holder of public office – would say that the job of promoting high standards in public life is now done.

Lord Nolan’s wise first report listed key elements that he believed needed to be in place to maintain standards – widely- accepted principles, codes of conduct, education, and independent scrutiny.  It’s clear that some of these elements are more developed in some areas of public life than others. While organisations from local councils to NHS trusts and schools have published codes of conduct, the Committee’s reports in recent years have frequently identified weaknesses in scrutiny and insufficient education in organisations about the expected standards of behaviour.  Good conduct is just as much about organisational culture as it is about formal rules and structures.  Building and maintaining a strong ethical culture requires constant vigilance.

When I first thought about applying for the role as Chair, it became quickly apparent to me that the standards landscape is crowded and confusing.  Lord Nolan’s seven principles – honesty, integrity, selflessness, objectivity, leadership, accountability and openness – serve as a bedrock, articulating the expectations of the public of those who serve them. They are more important than ever in tough political times when the public’s view of its politicians is, as outlined recently by the Hansard society, at a low point. But these principles cannot exist in a vacuum. The wider political culture must support them and members of the public must take these issues seriously when choosing who will represent them.

To some extent, the British public has always been healthily cynical about politicians and public figures but there has been a worrying sea change in the last few years in the way holders of public office are treated, particularly with the rise of social media, and especially in relation to political office. The Metropolitan Police recently reported that threats to MPs are at an unprecedented level. We simply cannot accept the current level of intimidation and abuse of people in public life.

The Committee’s 2017 report on intimidation in public life made important recommendations to address intimidation and safeguard important aspects of our democracy.  If talented individuals are no longer willing to participate in elections for fear of intimidation or MPs and councillors feel inhibited in their views for fear of reprisal, the quality and diversity of our public life will be severely damaged.

The Committee’s 25th anniversary will not be a complacent celebration of what has been achieved, I want it to be marked by a reaffirmation of the importance of the seven principles of public life, recognising that we all benefit from a vibrant, diverse public life based on these core values.