With its remit across public life, the Committee is maintaining a close watch on standards issues arising as a result of the Covid-19 pandemic. Recognising the unique and unprecedented nature of the challenge for the public sector, continuing to uphold the Seven Principles of Public Life is vital to maintaining trust in government and our institutions throughout this crisis. In a series of blogs, the Committee will discuss the relevance of these principles to the current crisis. We are not considering the government’s practical response to the crisis, e.g. the availability of PPE or length of lockdown, but rather monitoring any impact on standards and the Nolan Principles.

In this blog, Independent Member of the Committee, Monisha Shah, discusses whether exceptional times allow for exceptional measures. 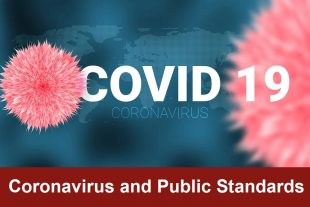 Covid-19 has required governments in all countries to make quick decisions and take drastic steps to protect communities and limit loss of life and income. The need to keep pace with the spread of the virus has led to the adoption of emergency response mechanisms that have included some restrictions on rights and freedoms, concentrations of power, and changes to governing frameworks and procedures, such as procurement processes.

It has also created opportunities for significant fraud and corruption. Governments have had to allocate unprecedented sums of money towards combating this pandemic and its brutal economic impact in what is surely the largest financial response to a single global health crisis. Media reports, supported by organisations like the World Economic Forum, IMF and Transparency International, have pointed to a corresponding increase in worldwide fraud and corruption – significantly in the awarding of public contracts to companies without competitive tenders, to businesses with no track records, or to those with links to senior officials.

Fraud and corruption are not new but, in the UK, we expect those responsible for public money to exercise their responsibilities in accordance with the Nolan Principles. The Government specifically expanded the Committee’s remit in 2013 to include all those delivering services on behalf of the taxpayer. Indeed, qualitative research conducted for this Committee by Ipsos Mori showed that the public does not differentiate between private sector providers of public services and those delivered directly by the public sector so long as they all uphold the same common ethical standards. Our 2014 report looked specifically at how the Nolan Principles should be applied in this context. The high-profile failure of Carillion in 2018 was a clear demonstration of how an absence of ethical leadership, transparency and accountability can undermine government effectiveness and result in a decline of public trust. There is no doubt that the public expect ethical standards in commissioning, contracting and monitoring arrangements for all those delivering public services on behalf of the taxpayer.

But should exceptional times allow for exceptional measures? Specifically, are decision-makers justified in deviating from the principles or the responsibilities of their office in order to avoid extreme threats to the nation or the health of its citizens?

If a rule or principle is to be followed only when it is optimal to do so, that suggests that it lacks any independent value and was not meaningful in the first instance. Governments and officials have argued that in circumstances such as these, where they have to act immediately, they have no choice – which may well be true – but the principles underlying the rule must still matter.

Checks and balances in modern democracies are designed precisely to ensure that those in power and authority are not self-serving. Even if a public interest cause of COVID proportions may justify some deviation from the rules, as the Nolan Principles make abundantly clear, this course of action can only be acceptable, or legitimate, if it is in the public interest.

This Committee believes that standards in public life are a public matter. Decision makers who are entrusted with responsibility for making decisions in the public interest do have to exercise their judgements in difficult circumstances, faced with hard choices. However, these judgements can only have legitimacy when they are made in accordance with the principles that are widely shared in society, like accountability, objectivity, and openness.

In this health emergency, there have been many heartening examples of people in public roles acting honorably and with integrity, prepared to be held to account.  It is also true, as reported in various media forums, that trust has been broken when exceptions are claimed in order to protect or pursue individual or familial interests, or when those in the public domain assume they can act as judge and jury on the acceptability of their conduct when claiming an exception.

The principles of public life exist to protect people’s trust in those who govern them.  Decisions which deviate from the rules, even in times of crisis, take an enormous risk in breaking faith with public trust and must, inevitably, be subject to greater retrospective scrutiny and accountability. The public may accept these difficult decisions if they are explained, but the case needs to be made. Decisions made under extreme conditions cannot claim immunity: those who make them must be open about the actions they have taken, and be accountable for them.